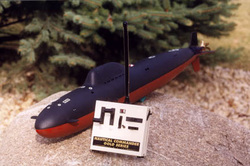 There are people who are more "in the know" about radios than me, but basically, you need a 75 MHz (not the new high freq. gear) surface radio - as opposed to RC airplane equipment.  Any brand will work, but as in cars, boats and women, you get what you pay for.

The number of channels required depends on how many goodies you are going to have on your sub. With some simple subs, 3 or 4 might be enough, other subs might need ten or more!

Generally, a channel for each of the following is needed: speed control, steering, dive planes, ballast vent and blow (one channel covers both, that is if your sub has a ballast system.) Add a channel for anything else on your boat - lights, sound effect modules, periscopes, torpedoes, radars, hatches, missiles, etc.  One thing to remember, the only LEGAL  frequency (that works underwater) in North America to operate submarines (that will work) is 75 mHz.

Unfortunately, Futaba and most other manufacturers are no longer making two stick 75 mHz transmitters in favor of the new 2.4 gigahertz models that aren't able to penetrate water! I guess the RC submarine "community" doesn't have much of a lobby with the FCC. With a little Googling, you can still find 2-stick 75mHz transmitters out there - so don't give up! 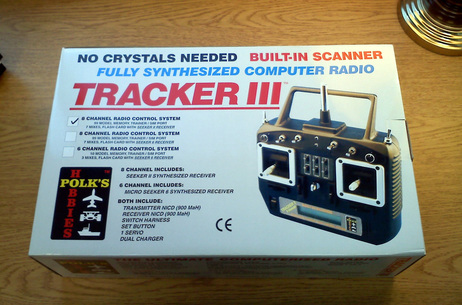 THE POLK's TRACKER III
While getting harder and harder to get - try Googling to see if someone still has a new one). The Polk's Tracker III computer radio is one of the BEST 75 mHz (the only US legal freq that will penetrate water) 8 channel RADIOS OUT THERE. You can set it to transmit on ANY FM 75 mHz channel and to any of your current surface frequency models. If you use it with their Seeker receiver in your boat - you can use ANY of the surface frequencies with that model - all with no crystal swapping! Turn on the transmitter - it scans for an open frequency (or you can manually pick one) then hold the antenna near your model, push the "set button"  on the receiver - the receiver FINDS your transmitter - they link up and you're good to go. VERY cool. And you can use it with your Futaba receivers too - but you just have to go with the frequency that the receiver is preset.

On the negative side ~ the instruction manual is the worst one I have ever seen. Besides being rife with typographical errors, it is VERY poorly written and extremely difficult to understand - at least for my tiny little mind. Luckily, the Tracker III is a fairly easy radio to use, after you have somebody patiently explain how to program it.  I found some instructions on About.com, edited them for submarine guys, and posted them on my Polk Tracker III pages.

POLKS' A+ SERVICE:  I bought my original Tracker II (the ugly version of the Tracker III) radio at the local hobby shop for $249. I think at the time, it was actually cheaper than you could buy it directly from Polks. It came with only one servo (Futabas work fine), the 8 channel Seeker receiver (now they are 6 ch), and a switch harness (plus the horrendous "instrukshun manuwell".)

A few weeks after purchasing it - I was careless enough to dip the antenna in the water several times while taking photos of my sub. When I put the radio upright, the water that snuck into the antenna - ran down, soaked the motherboard and it fried. Polks replaced the whole transmitter for $30! Not bad service for a problem that I admitted to them was my own fault. Also - the battery life is long and you can buy extras from Polks for less than $20. Compare that with $30+ for an Airtronics replacement battery. 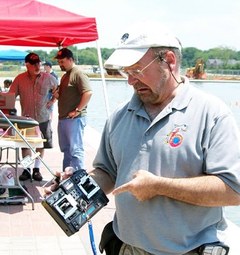 The Tracker II - was
about as ugly as a radio
could be!