The History of RC Subs 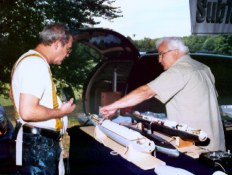 Photo by Tim Smalley
Radio controlled subs have been around much longer than you might think!

The earliest radio controlled (R/C) submarine I have heard of was featured in a book about model boating first copyrighted in 1907 and Nicola Tesla built an RC surface boat in the late 1800s! Manufactured R/C subs came about in the 1970's with the introduction of low cost, multifunction, reliable radio control equipment. My first receiver in the 1960s (used for a radio controlled duck decoy!) had an escapement mechanism that clicked left, center, right and back again. No fine tuning the steering in 1966! Since then, the variety, quality, and technology has expanded considerably.

PHOTO: Two of the greats of RC model submarines, Art Meyer (L) and Skip Asay (R), discuss the finer points of the hobby at the SubCommittee's SubRegatta 2001 held at the U.S. Navy's sub base at Groton, Ct. (This event is now held in Carmel, Indiana at the Veterans' Memorial Park and reflecting pond in late July or early August.) Art Meyer, one of the fathers of the hobby, was very active in R/C submarines up to the time he passed away and a member of the SubCommittee and SubRon6. Skip Asay, the "Godfather" of modern R/C subs knows more about electronics and model subs than just about anyone else in the business. Skip tells a story about a model RC sub that he built 30+ years ago and was owned and operated for about ten years by comedian Charlie Callas. Skip has now reclaimed the boat and has refit it to make her ready for sea duty once again.  Art (Chip) Meyer passed away in February of 2005 and is missed by all his buddies in SubRon6.

In the 1990s, Water Tight Cylinders were developed and marketed where a model sub's "dive and drive" systems could ostensibly be moved from model to model and you no longer had to remove dozens of nuts that fastened down the hatches of older "bulkhead" style subs to work on the running gear. This leap forward made it possible for many of us "non-engineers" to get into the hobby of RC submarines! Now, many sub guys build their own WTCs. 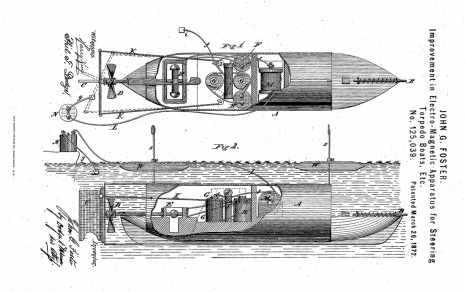 While not RADIO controlled, this wire guided remote controlled torpedo was patented in 1871!

~  By the way, this site is not meant to replace SubCommittee.com  or any other submarine hobby website or vendor. If you want to get into RC subs, you HAVE to join the SubCommittee! They are the greatest bunch of guys you'd ever want to meet and they are goofy about submarines - JUST LIKE YOU!!! And the membership is only $15 US per year.